May 14, 2021 – Alphamin Resources Corp. (AFM:TSXV, APH:JSE AltX, “Alphamin” or the “Company”), a producer of 4% of the world’s mined tin from its high-grade operation in the Democratic Republic of Congo, is pleased to provide initial assay results and an exploration update on its Mpama South Exploration Drilling programme.

“These drill results are very encouraging for the Mpama South Prospect and exceeded our expectations. Mineralisation within the Main and Footwall Zones point to another high-grade deposit. We are encouraged by the Mineral Resource expansion potential within our mining permit, and our view that the 13km long Bisie Ridge hosts multiple high-grade mineralised systems continue to be reinforced by these results. This brings us closer to realising our vision of becoming one of the world’s largest long-life tin producers”

Alphamin’s exploration initiative aims to extend the life-of-mine at its currently producing Mpama North mine, to declare a maiden mineral resource for the Mpama South Prospect (located 750 metres on strike from Mpama North mine) as well as to discover at least one additional deposit on the highly prospective Bisie Ridge (13km strike length).

Mpama South is a high-grade tin discovery, located 750m south of Alphamin’s operating Bisie mine. A small diamond drilling programme of sixteen drillholes completed in 2016 recorded notable cassiterite intercepts in similar alteration styles to the Mpama North mine, including apparent widths of:

Alphamin has re-commenced its Mpama South exploration activities with a first phase 5,800 metre diamond drilling programme which started in December 2020 and a second phase 4,200 metre programme from April 2021. To date, 8,700 metres and 40 holes have been completed. Phase 3 for 6,800 metres will commence in May 2021 finishing in July/August 2021 and all phases are intended to form the basis of a Mineral Resource estimation exercise on at least 16,000 metres, to be completed by end 2021. Infill drilling and further step-out drilling will continue for the remainder of 2021.

All holes completed to date have shown visual mineralisation, confirming the presence of the Main Zone of mineralisation over 500m of strike, while several exceptional intercepts comparable to the thick veins and brecciated zones of cassiterite existing at Mpama North were also observed (see Figure 1). In addition, a new zone of mineralisation was discovered in the footwall which appears continuous and highly mineralised (“Footwall Zone”).

Independent laboratory assays by ALS Group in Johannesburg, South Africa on the first thirteen drillholes have exceeded management’s expectations. The discovery of the parallel Footwall Zone of mineralisation some ~25m from the Main Zone, has also contributed towards the expansion of the Mpama South Drilling Programme scope and planned drill meters in 2021. The characteristic intense chlorite alteration associated with the high grade cassiterite mineralisation at the Mpama North operation continues to be pervasive at Mpama South in all drillcores too. These findings bode well for management’s objective to declare another high-grade tin Mineral Resource by the end of 2021. Sample preparation, laboratory methodology and QAQC is discussed in Appendix 1.

Selected significant intercepts in the Main Zone from the Mpama South drilling program are listed below as apparent widths as well as all intercepts of greater than a 0.5% Sn threshold detailed in Appendix 2:-

While significant intercepts in the newly discovered footwall zone are as follows:-

Although only shallowly drilled to date, tell-tale signs already lead management to believe that the potential for another high grade payshoot exists at Mpama South (Figure 2), similar to that at Mpama North, 750m further north along strike. The deposit size and shape, as it is starting to emerge, is interpreted from previous and recent drilling assay results together with visual interpretations of drill core by management (Figure 2). 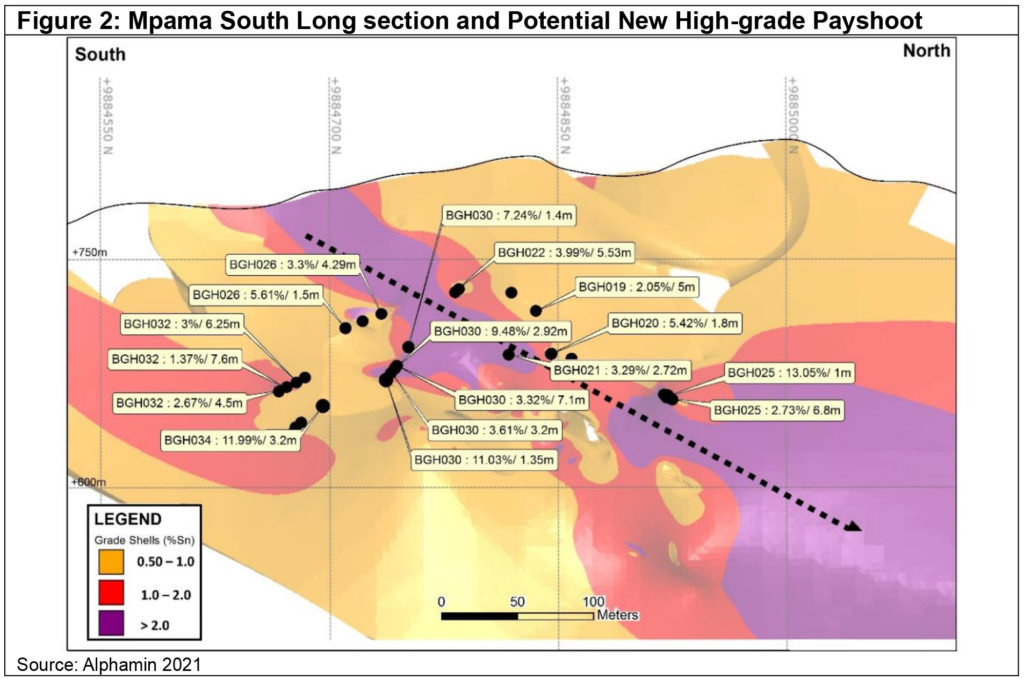 The Mpama South long section and potential high-grade payshoot when compared to what is already known and being mined at Mpama North, leads Management to believe that a similar mineralisation model may have repeated further south along the ridge at Mpama South. To increase the understanding of the mineralisation model and to confirm the hypothesis of the potential repetition along the ridge, the structural and lithological controls are currently being expressly investigated by consulting structural geological specialists.

In addition, assay results confirm attractive mineralised intercept widths at Mpama South. These broad intercepts are illustrated in several cross sections in Figure 3, Figure 4 and Figure 5 and are based on the previous (2012 – 2016) and recent exploration results and Management’s interpretations down plunge below existing drilling. 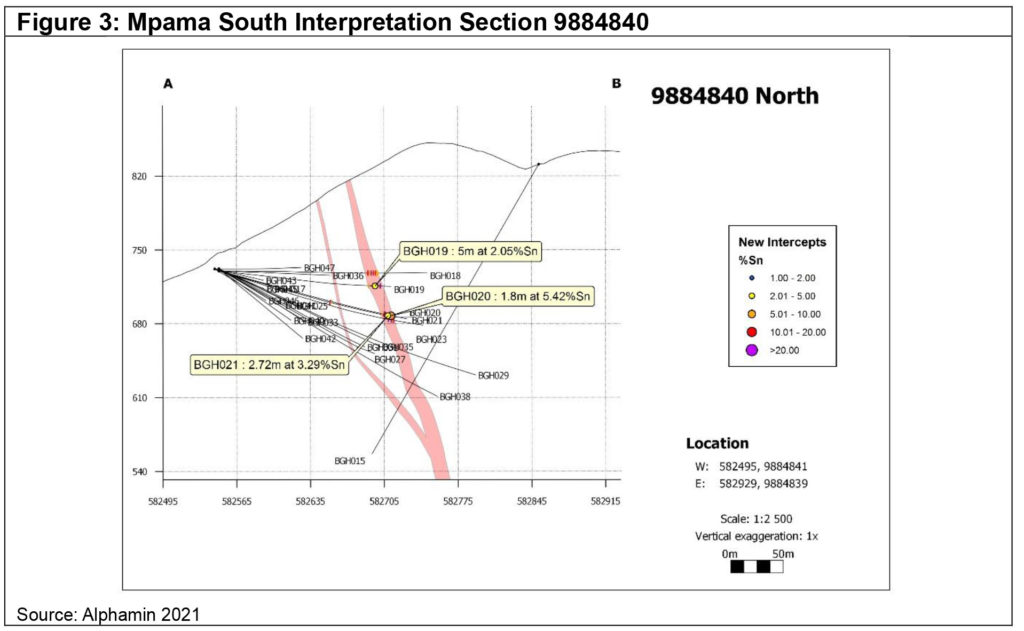 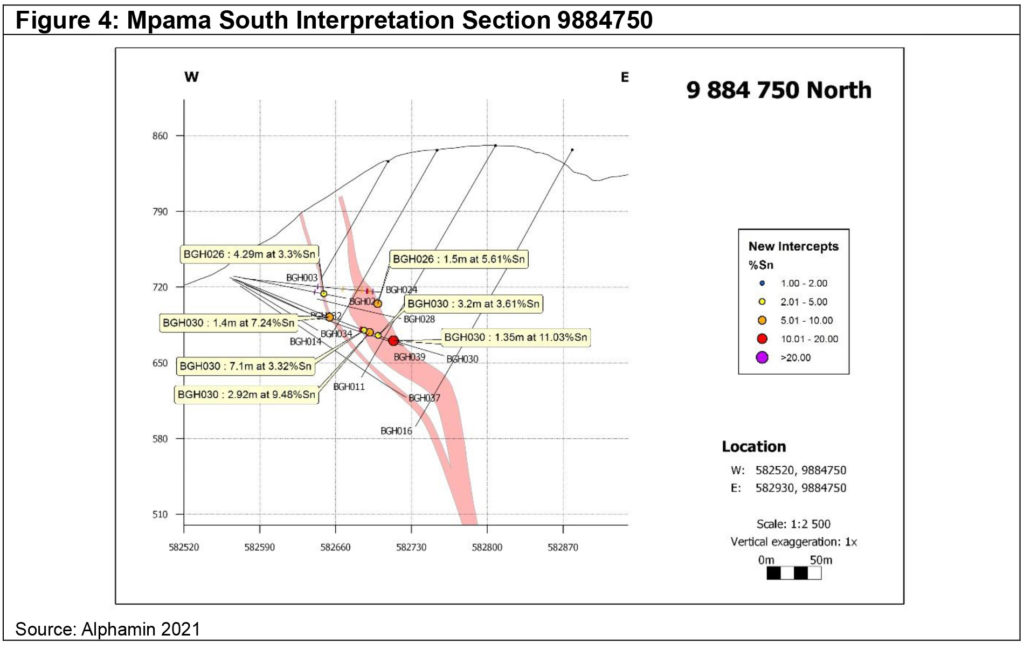 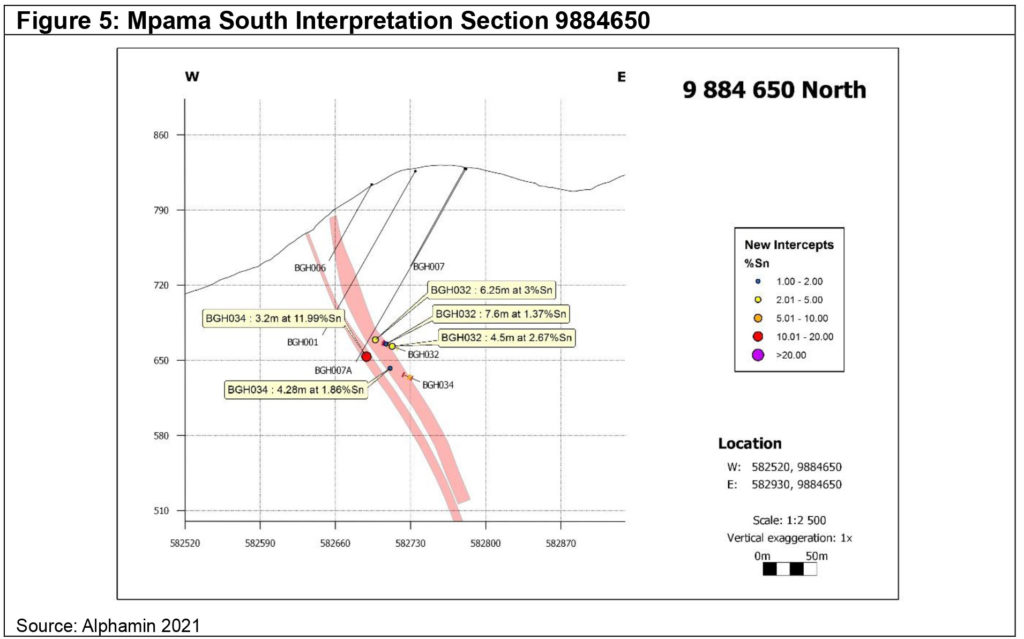 The Company has engaged structural specialists TECT Geological Consulting to perform an extensive re-interpretation of the regional structural setting of the Company’s licences. This includes re-interpretation of airborne geophysical and remote sensing data compiled during earlier exploration phases.  The Company has consequently re-prioritised the drilling of highly anomalous, co-incident geophysical and geochemical targets along the 13km Bisie Ridge. In parallel with this, TECT is undertaking 3D implicit modelling of major structures, country rocks and mineralized zones, based on new data including drilling, mining and underground operations at Mpama North. Combined, these investigations have led to several key developments in our understanding of the mineralisation and the geometry of the mineralised zones.

The Bisie Ridge, which falls within the Company’s mining licence, represents the contact between a granite/basement and metasediments.  Mineralization occurs where NE-trending structures cross-cut this contact, evident at both the Mpama North and Mpama South deposits.  This configuration is also evident at several other localities along this 13km ridge contact, in the form of several anomalous geophysical and geochemical targets south of Mpama North. The priority targets for drill-testing in 2021, supplemented by the ongoing detailed geochemical soil sampling campaign, are the ‘Marouge Target’ and the ‘V Target’, the characteristics of which strongly match those at Mpama North and South.

Numbered from North to South in Figure 6, 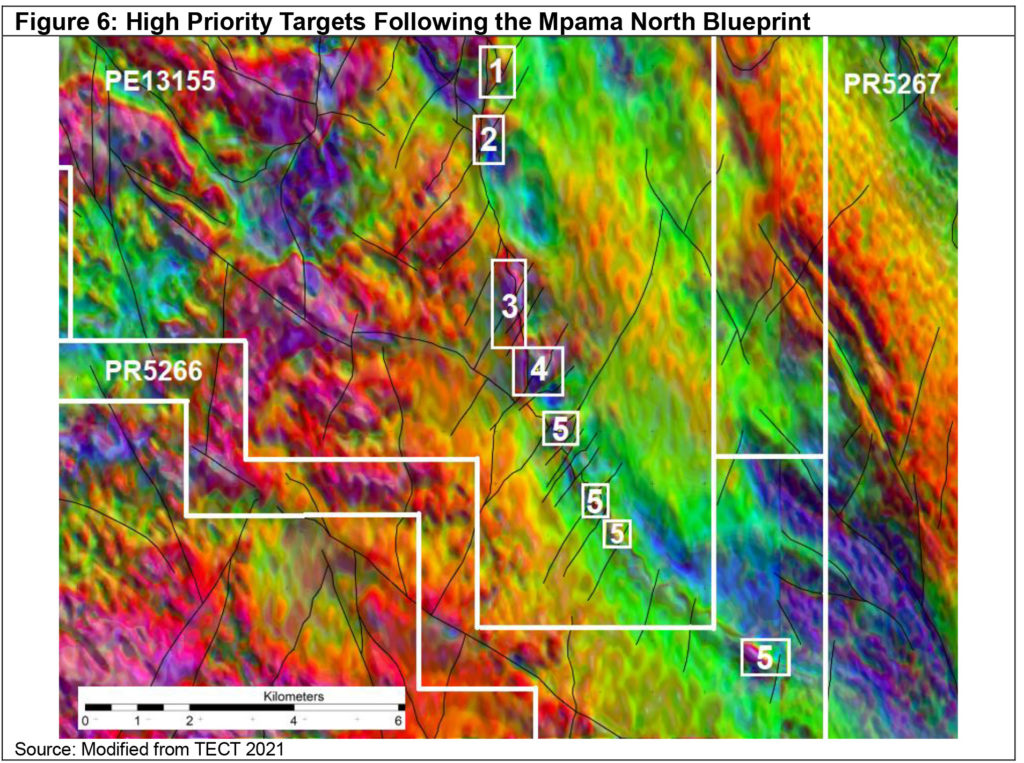 Mr Jeremy Witley, Pr. Sci. Nat., B.Sc. (Hons.) Mining Geology, M.Sc. (Mining Engineering) (Hons.), is a qualified person (QP) as defined in National Instrument 43-101 and has reviewed and approved the scientific and technical information contained in this news release. He is a Principal Mineral Resource Consultant of The MSA Group (Pty.) Ltd., an independent technical consultant to the Company.

After receipt of diamond drillcore from the drillers at the drill rig in marked core trays, core was transported to the Company’s core shed by the site geologist for logging and sampling. After sample mark up, lithological and geotechnical logging and photography, the core was split longitudinally in half using a water-cooled rotating diamond blade core saw. The cut core was replaced into the core tray with the half to be sampled facing upward. Based on previous experience at Bisie with high density variability and at the CP’s instruction (Mr J. Witley of MSA Group), specific gravity (SG) was performed exclusively on the half core that was to be sampled. The Archimedes method of weight in air vs weight in water was used on the whole length of the half core that was to be sampled and then replaced in the core trays.

Air dried samples were placed in pre-numbered sample bags together with pre-printed numbered sample tickets, which were cross-checked afterwards to prevent sample swaps. Sample bags were sealed using a plastic cable tie and then placed into poly-weave sacks which were in turn sealed with plastic cable ties. Each poly-weave sack was marked with a number and the sample numbers contained within, ready for delivery to the on-site Alphamin-Bisie laboratory for sample preparation.

At the laboratory, samples were first checked off against the submission list supplied and then weighed and oven dried for 2 hours at 105 degrees Celsius. The dried samples were crushed by jaw crusher to 75% passing 2mm, from which a 250g riffle split was taken. This 250g split was pulverised in ring mills to 90% passing 75μm from which a sample for analysis was taken. Samples were homogenised using a corner-to-corner methodology and two samples were taken from each pulp, one of 10g for on-site laboratory assaying and another 150g sample for export and independent accredited 3rd party laboratory assaying.

For the initial on-site laboratory assay, 10 grams of pulverised sample is mixed with 2 grams of binder before press pellet preparation at 20t/psi for 1 minute. Press pellets are analysed in a desktop Spectro Xepos XRF analyser, twelve at a time, for Sn, Fe, Zn, Cu, Ag, Pb and As along with a standard, duplicate and blank. The analytical method conducted on the pressed pellet has an expected 10% precision and an upper detection limit of 70,000ppm and lower detection limit of 500ppm. Over-limit samples are titrated by wet chemistry with an upper limit validation of 70% Sn. The on-site laboratory assays are merely an exploration tool and were not used for reporting the exploration results, which are based solely on the ALS assays.

The 150g sample is packaged in sealed paper sample envelopes and packed in a box for export in batches of approximately 500 samples and prepared for export authorisation with national authorities. Once authorisation is received, samples are air-couriered to ALS Group in Johannesburg South Africa, a subsidiary of ALS Limited, which is an independent commercial analytical facility. ALS operations are ISO 9001:2015 certificated and the Johannesburg office is ISO 17025 accredited for Chemical Analysis by SANAS (South African National Accreditation System, facility number T087), although the accreditation does not extend to the methods used for tin.

Received samples at ALS Johannesburg are checked off against the list of samples supplied and logged in the system. Quality Control is performed in the way of sieve tests every 50 samples and should a sample fail, the preceding 50 samples are ground in a ring mill pulverizer using a carbon steel ring set to 85 % passing 75μm. Samples are analysed for tin using method code ME-XRF05 conducted on a pressed pellet with 10% precision and an upper limit of 5,000ppm. The over-limit tin samples are analysed as fused disks according to method ME-XRF15c, which makes use of pre-oxidation and decomposition by fusion with 12:22 lithium borate flux containing 20% Sodium Nitrate as an oxidizing agent, with an upper detection limit of 79% Sn.

Method code ME-ICP61 (HF, HNO3, HClO4 and HCl leach with ICP-AES finish) is used for 33 elements including base metals. ME-OG62, a four-acid digestion, is used on ore grade samples for lead, zinc, copper and silver. Both methods are accredited by SANAS.

The program is designed to include a comprehensive analytical quality assurance and control routine comprising the systematic use of Company inserted standards, blanks and field duplicate samples, internal laboratory standards and analysis at an accredited laboratory. The pulps were accompanied by blind QAQC samples inserted into the sample stream by the Alphamin-Bisie geologists. These comprised blank samples, certified reference materials and pulp duplicates each at an insertion rate of approximately 5%.

The QAQC results demonstrate that the assay results are both accurate and precise with an insignificant amount of contamination (in the order of 60pmm Sn on average) and negligible sampling errors. The Alphamin-Bise Mine laboratory results also confirmed the magnitude of the ALS results, although the ALS results had a tendency to be in the order of 5% lower relatively overall than those of the Alphamin-Bisie laboratory. Further verification work is in progress by additional check assays by SGS South Africa (Pty) Ltd.

The Company’s Qualified Person (QP) for the drill programme, has verified the data disclosed, including drill core, sampling and analytical data in the field and lab. 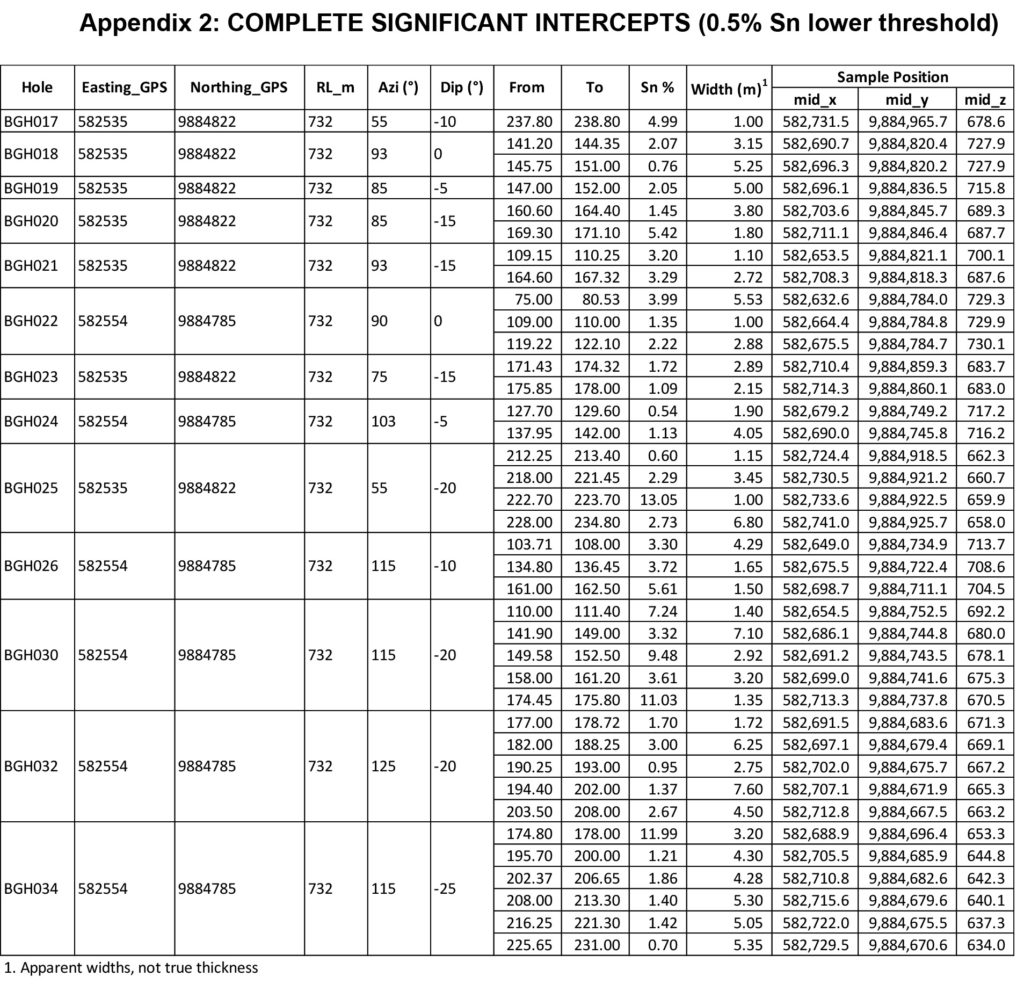